Agios Mamas
Heading down towards the Sithonia peninsula, about four kilometers after the junction you will come to a sign to Agios Mamas. The town has a long, broad beach** and is best known for the festival held here each year in early September, a custom dating back to Byzantine times. 2.5km along the road you will find the prehistoric settlement of Agios Mamas.

Olynthos
Nea Olynthos lies next to the site of ancient Olynthos (+1.5km) and is the modern counterpart of the Byzantine village of Myriofyto. It is said to have taken its present name from its founder, Olynthos, brother of the Thracian king Rissos. Others claim the name comes from the hero Olynthos, son of the river god Strymon. The local cultural association organizes a Festival of the Olive here every year**. North of Olynthos, at the site known as Mariana, there is a fortified tower dating from the 14th century, built by the Docheiariou Monastery on Mt. Athos. About 7km from the village is the site of the ancient city of Mikyverna, the port of Olynthos, which must have been destroyed when Olynthos was laid waste by Phillip II in 348BC.

Gerakini
Once a little community of workers in the magnesite mines, Gerakini is now one of the main and most cosmopolitan of Halkidiki’s resorts. The area offers a wide choice of hotels, rented rooms, tavernas and bars. There are also many privately owned holiday homes.

Ormylia
Located above the main road, its name is probably a corruption of that of the ancient city of Sermyli, which was located somewhere nearby. Just outside the village is the Convent of the Annunciation. The beach is 7.5km from the village.

Metamorfosi
Carry on another 9km along the main road, a pleasant drive through pine trees, and you come to Metamorfosi, another community founded by refugees from Asia Minor. There are a large beach, children’s summer camps set in the pine trees by the sea, hotels, two camping sites and plenty of rooms to rent.

Nikiti
The village is located close to the site of ancient Galipsos, which played an important role in the events of the Peloponnesian War. Most of the region formerly belonged to monasteries on Mt. Athos (Megisti Lavra, Xiropotamou, Xenofontos).
From the traffic lights turn down towards the sea. The road along the waterfront is lined with tavernas and ouzo bars, cafes and rented rooms. There are also a number of private houses. From the upper part of the road there are signs to the traditional heart of the town, with its stone houses (many of them now renovated), narrow streets, little square with a fountain, a plane tree, a little taverna, a café and a couple of guesthouses. The upper part of the town is overlooked by the Church of Agios Nikitas, built in 1867. One of the area’s most important annual events is the swim across the Bay of Toroni**. On the main street you will find grocery stores, mobile phone shops, shops with goods for tourists, butchers’ shops and supermarkets. The town is the administrative capital of Sithonia. It is two kilometers beyond Nikiti that the real Sithonia begins.

Neos Marmaras
The town was founded in 1922 by refugees from the island of Marmara in Asia Minor. Until then the land had been owned by the Grigoriou Monastery on Mt. Athos. The history and tradition of the local people are symbolized by the boat Santala, which led the fishing fleet in their original home. A replica of the boat can be seen in the town harbour. The Church of Agion Taxiarchon houses the icons the original refugees brought with them from Asia Minor. The modern-day Neos Marmaras is the most cosmopolitan of all the villages and towns of Sithonia, with hotels and rented rooms, camping sites, bars, cafes, patisseries, tavernas, ouzo bars and pizza parlours, clubs, bouzouki halls, supermarkets, wine shops, travel agencies, banks, folk art shops, clothes shops, a go-cart course and a health centre. Just along the coast is the community known as Paradeisos, with its sandy beach**, rented rooms and tavernas.
Just two kilometers south of Neos Marmaras is the big Porto Carras hotel complex**.

Parthenonas
By 1970 this mountain village had been abandoned by all its inhabitants, who moved down to Neos Marmaras. It is believed to occupy the site of the ancient city of Parthenopolis. Parthenonas is built on the slopes of Mt. Dragoudelis (or Itamos), the main mountain mass of Sithonia, at an altitude of 810m. In recent years the village has acquired a new lease of life. Many of the old houses have been restored, preserving the original character of the village. There are two or three tavernas (one open also in winter), a café-bar and a few guesthouses. Parthenonas has its own cultural association, the Parthenon, founded in 1985 by a group of young people from the village. The idea is to preserve the customs and traditions of the place, and to ensure that the traditional architectural styles are preserved.

Toroni
This was one of the most important cities in ancient Halkidiki, which was destroyed in the 6th century AD by raiding barbarians. Traces of a prehistoric settlement have also been found here. On the Lykithos headland stood the second acropolis of Toroni, and the remains of a Byzantine fort can still be seen, probably destroyed during the Turkish occupation. On the road between Toroni beach and Porto Koufo you can see the ruined basilica of Agios Athanasios, dating from the 5th century AD.
The beach at Toroni extends over 2km in length**.

Porto Koufo
A natural harbour, one of the safest in Greece, Porto Koufo offers a calm mooring for fishing boats and yachts in all weathers. Thucydides refers to it as ‘the deaf harbour’, i.e. so well protected one cannot even hear the sea. Beyond the harbour mouth lies the southernmost headland of Sithonia, Kartalia. This is an imposing area of rocks and cliffs, some towering over 100m high. The little village has one or two hotels, some rented rooms with views of the harbour, and some small tavernas.

Sykia
One of the oldest villages in Halkidiki, and formerly known as Logos, according to Athonite documents the area once belonged to the Megisti Lavra Monastery. There are various explanations of how the village came to be called Sykia. The first explains the name as meaning the ‘shadow (skia) of Athos’; the second interprets it as a corruption of Singos, name of an ancient city in the vicinity, and the third claims there was once an ancient fig tree (sykias) in the centre of the village, around which it grew up. The city is traditional in plan, with narrow streets and quaint old houses. It also has the Church of Agios Athanasios, dating from 1819, which has twice burned down. On nearby Koukos Hill are the remains of a castle; excavation has shown that the area has been inhabited since the 11th century. There are rooms to be rented in Sykia and the surrounding area, as well as camping sites and tavernas much prized for their local meat.

Sarti
This is a town built by refugees from Afissia, an island in the Sea of Marmara, in Asia Minor. The land was part of a dependency that belonged, in the 14th century, to the Xeropotamou Monastery on Mt. Athos. The ancient city of Sarti occupied the site, and gave the modern village its name. In the summer months Sarti is a vibrant tourist town, with hotels, rented rooms, tavernas, souvlaki shops, cafes, bars, clubs, ouzo bars, folk art shops, wine shops, supermarkets, travel agencies, car hire agencies, etc.

Vourvourou
A seaside tourist resort in eastern Sithonia, with a mix of privately owned houses, hotels and rented rooms. It is also home to the holiday complex for professors at the Aristotle University of Thessaloniki. Dotted around the bay are nine tiny islands, the largest known as Diaporos.

Ormos Panayias
The Byzantine church located here gave its name, Panayia, to the district. In the picturesque harbour of Ormos you will find tavernas, bars, cafes and a few rented rooms. Daily cruises start here for Mt. Athos**.

Agios Nikolaos
This is one of the oldest villages in Halkidiki, traditionally thought to have been created by a union of people from smaller communities. South-west of the village, at Vetrynos, there are traces of a prehistoric settlement. In the 14th century the area of Pyrgos was also inhabited, to the north-east; in classical times it evolved into the city known as Singos. Here too was the Monastery of Agios Chrysokamaros, a dependency of the Xenophontos Monastery on Mt. Athos. Documents from the 14th century also refer to a community known as Fourneia, the remains of which can still be seen in the area known as Palaiofournos. The modern village of Agios Nikolaos still has some lovely old stone houses and a fine main square with cafes and restaurants. The village harbour is Ormos Panayias, 2.5km away.

Pyrgadikia
The village lies on the northern coast of the Bay of Singos, the waters separating Sithonia from Mt. Athos. Also known as Agios Dimitrios, the village is built on an outcrop of rock. Its name is believed to be derived from a Phrygian word gordos, meaning town or city. It was founded by refugees from Afthoni in Asia Minor, in 1922. In the church of Panayia Kastrella you can still see the icon of the Virgin brought with them from Asia Minor by the original settlers. The story goes that the Turks threw the icon into the sea, but it was later recovered by the local people inside a castle – hence the name Kastrella. The church of Agios Dimitrios, which gives the village its official name, is built on the site of an early Christian basilica from the 6th century AD, and was formerly used as a school. There is a road from Agioi Theodoroi to the Chapel of the Transfiguration, where you can enjoy a panoramic view; it was used as a lookout point by the Turks. 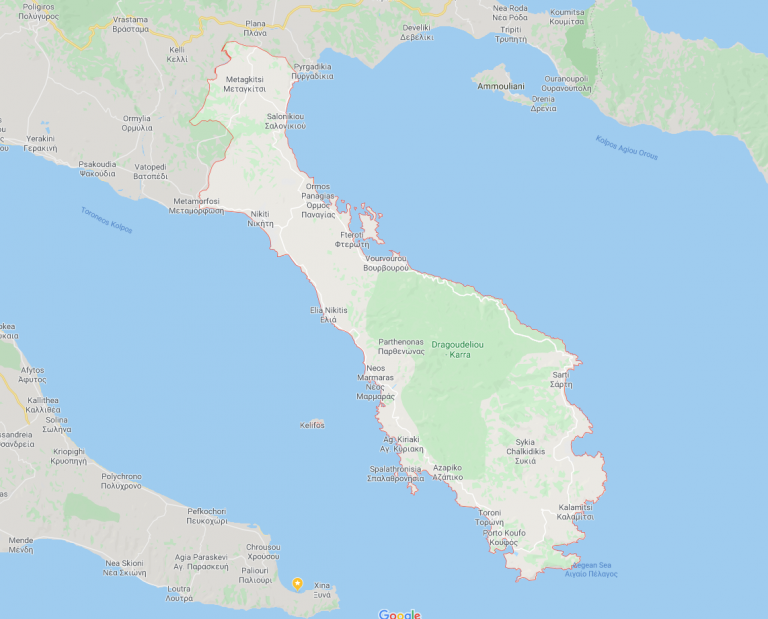 The picturesque seaside villages of Halkidiki were first home to families of fishermen. Each village had its little harbour where the fishermen moored their vessels

Nea Moudania One of the more urban of the towns of western Halkidiki, with a population whose grandparents were refugees from Asia Minor in 1922.

Hotel "Decauville" consists of modern rooms, all with a view to the sea and equipped to accommodate, ensuring…

Never before has luxury, elegance and modern comfort coexisted so harmoniously with the majestic landscape of…

View All Hotels in Sithonia