Olympiada
Olympiada lies on the north-eastern coast of Halkidiki, on the road to the Athos peninsula. It was built by refugees from Asia Minor on the site of the ancient Stageira. At that time the location was known as Limbiada, because according to tradition it was here that Kassandros exiled the mother of Alexander the Great, Olimbiada. The modern village, set in a natural harbour and stretching along a fine beach, is surrounded by green mountains and magical coastline, attracting large numbers of tourists in summer.

Ierissos
The main town of the municipal district of Aristotelis and one of the largest market towns in Halkidiki, Ierissos stands on the site of ancient Akanthos, a colony of settlers from Andros, and was first inhabited in prehistoric times. Its modern name is derived from the Latin ericius. It was a member of the Athenian Alliance. The town was burned down by the Turks in the 1821 uprising. The prytaneum of ancient Akanthos can be seen at the Ierissos archaeological site, and the Krounas tower is an impressive sight to visit. Modern Ierissos is a well-equipped resort, an ideal destination for unforgettable holidays. In May 2005 the town opened an aquarium, where visitors can see a variety of fish and shellfish from the local waters, including gildhead, mullet, perch and lobster. The 40 cubic metre tank contains sea water continually renewed by a special pump connected to the sea. The amphitheatre at the town’s cultural centre shows 3D videos on a curved screen.

Mavro Aloni
This is the location in Ierissos where, in 1821, during the uprising in Halkidiki, the Turks slaughtered 400 local people at the orders of Sidik Yusuf Bey. Every year the massacre is commemorated on the third day of Easter, with a service followed by a special dance, known as the kangeleftos, a recreation of the slaughter, and songs full of the people’s longing for freedom. The religious ceremonies begin in the main church of the village and then feature a procession led by the priests, with the icon of the Resurrection, banners and the national flag, making its way to Aloni to the sound of chanting and the beating of the wooden prayer board. On the road to Nea Roda you will pass the Ierissos boatyards, where they build and repair fishing and leisure craft using traditional methods. Only timber is used and the skills are not formally taught but handed down from generation to generation.

Nea Roda
The village is built at the narrowest point of the Athos peninsula, where Xerxes had a channel dug in 480BC to allow his great fleet to pass. The channel was 12 stades in length (about 2,900m) and was wide enough to allow two triremes to pass. It can just barely be made out today. Nea Roda is the largest of all the refugee villages of northern Halkidiki, founded immediately after the Asia Minor catastrophe at the location known as Provlakas, by forty refugee families. It is now a resort town with a fine beach, hotels and camping sites, bars and tavernas.

Ouranoupoli
Another refugee village, built by refugees from the Marmaronisia islands and Kaisareia, just after 1924. The land was owned by the Vatopediou Monastery as early as 1018 and was known as Prosforion. The name Ouranoupoli was given the town in 1946, to commemorate the ancient city which once stood nearby. The main gateway to Mt. Athos, Ouranoupoli is now a busy resort town with large hotels (2-3km outside the centre of town), rented rooms, small guesthouses, cafes, bars, restaurants, folk art shops, etc.
During a stay here it is worth visiting the Prosforiou Tower**, as well as taking a cruise around the Athos peninsula. You can also rent a boat and tour the Drenia (or Gaidouronisia) islands, just a short distance away, as well as Ammouliani.

Ammouliani
This is the only island in Halkidiki with a permanent population, around 600 people, descended from refugees from Asia Minor. Until 1925 Ammouliani was a dependency of the Vatopediou Monastery of Mt. Athos; two or three monks lived here to administer the monastery’s estates. The island has a surface area of 4.5km. There are hotels here, as well as rented rooms and studios, camping sites, picturesque tavernas serving fresh fish, cafes, bars, night clubs, supermarkets, etc. The island is reached by ferry from Tripiti (120km from Thessaloniki), and lies just two nautical miles from the coast. You can find out the sailing times by calling the harbour master at Ouranoupoli on 23770 71248 or at Ierissos on 23770 22666.

Gomati
This large village, set among low hills and olive groves, was founded in 1932 when the Byzantine village of the same name was flattened by earthquakes and its residents moved here to a safer site. Close to the village there is an attractive stone bridge, with two arches, and the local beach is at Develiki. 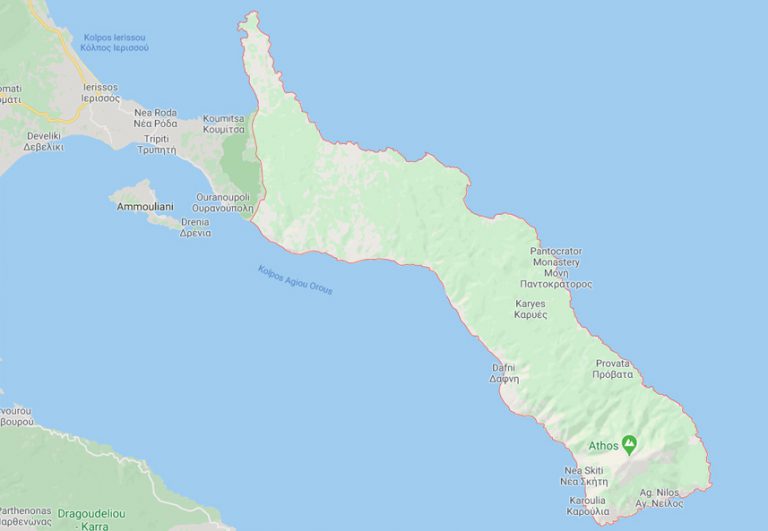 The mademohoria take their name from the Turkish word for mine, and they are the mining villages which enjoyed great prosperity during the years of

Pyrgos hotel, situated in a distance of 130 km. from Thessaloniki, is built within an idyllic environment at…

Centrally located in Ierissos of Chalkidiki and just 100 m from the beach, the family-run GKEEA Boutique…

View All Hotels in Athos