Nea Kallikrateia
Nea Kallikrateia is situated just before the peninsula of Cassandra, 43km from Thessaloniki. It owes its name to the refugees from Kallikrateia in Eastern Thrace who moved here in 1922 in the Asia Minor catastrophe. During the Byzantine era the land on which the village is built belonged to the Stomion dependency of the Athonite monastery of Xenofontos. Today Nea Kallikrateia offers a large organized beach, many bars and cafes, tavernas, and hotels ideal for a pleasant stay**.

Nea Irakleia
Located near Nea Kallikrateia is the refugee village of Nea Irakleia, where a silver reliquary dating back to the 4th and 5th century AD was found, bearing engraved scenes from both the Old and New Testaments on all four of its sides. The images depict Jesus between the apostles Peter and Paul, Daniel in the lion’s den, the three young men in the fiery furnace, and Moses on Mt. Sinai being given the Ten Commandments. This discovery is displayed in the Archaeological Museum of Thessaloniki. Many of the local people work in stock-raising, while in Agios Pavlos the many vineyards account for the municipality’s main export.

Flogita
A seaside refugee village which today has a well-developed tourist trade, Flogita boasts small tavernas, cafes, and bars, as well, of course, as its sandy beach. Near Flogita there are the ruins, dating from the 17th century, of the dependency of the Athos monastery of Panteleimona. After the uprooting of the populations of Asia Minor, an American hospital operated on the site for many years, providing care to the hundreds of refugees who settled in the area

Galatista
Reference to Galatista dates back to as early as the end of the 9th century AD, while later, after the Turkish occupation in around 1500, the village became the property of Ishak Pasa. In the area below Galatista, near the church of Agia Paraskevi, the ancient settlement of Anthemous is thought to have been located. Anthemous was a city that ruled the surrounding region, which was known by the same name. Anthemous was granted by the Persians to Macedonia. King Amintas I then presented the city as a gift to Hippias the tyrant, son of Peisistratos, who refused the offer. The art of icon painting flowered for a period in Galatista during the 19th century. The village supported a number of religious artists who decorated many of the churches of Halkidiki, as well as the rest of northern Greece, with their icons and frescoes.

Vavdos
Vavdos is a picturesque mountain village with old houses set out like an amphitheatre on the lush green hillsides, stone paved streets, picturesque alleyways and a pleasant town square with a huge plane tree. Some of the village residents make a living through beekeeping, farming, stock-raising, while many work in the neighbouring magnesite quarry. Vavdos is the birthplace of Nikolaos Germanos, a parliamentary representative and politician of northern Greece, founder of the International Trade Fair of Thessaloniki in 1926. The sights worth seeing in the village include the monolithic stone altar in the parish church, which dates back to the early Christian era. This proves that the area of Vavdos had been settled since the end of the Roman Empire.

Agios Prodromos
A small mountain village about 50 km. from Thessaloniki on the road towards Arnaia, Ouranoupoli, and Mt. Athos, Agios Prodromos is famous for its souvlakia, which you can find in any of the numerous tavernas in the center of the village.

Polygyros
The capital city of Halkidiki and the seat of the Polygyros municipality is located in the center of the region. Polygyros was built on the southern slopes of Mt. Holomondas at an altitude of 550 meters. Its name is thought to have been inspired by the many twists and turns in the endless surrounding hills. Another explanation stems from “Poly-geros” or “very-strong”, a reference to the good climate but also possibly “Poly-ieros” or “very-holy”, because of a temple that used to exist in the area. There have been references to Polygyros since Byzantine times, and it is where the Halkidiki uprising started on May 17, 1821. When visiting Polygyros, walk through its traditional web of narrow streets with their old houses. The scenic location of Exi Vrises is well-known and named for its six water taps. A restaurant and café afford the opportunity for relaxation, food, and coffee.

Another beautiful stop is Panagia, featuring a small church of the same name. Just 6 km down the road that leads to Taxiarchis, and located above the general hospital, is the location known as Tsoukalas, which offers a panoramic view of the township.

When in the center of Polygyros, also make sure to visit the archaeological museum. Throughout the year Polygyros organizes various events of cultural and other kinds **. Small hotels and guesthouses are available for an overnight stay while tavernas and quaint ouzo bars provide traditional local delicacies.

Vrastama
Vrastama is a scenic mountain village of Mt. Holomondas, one of the oldest in Halkidiki, just 15 km east of Polygyros. The village is also known as Vrasta. The settlements of Kelli and Plana are also part of the district. The village is named after a monk who was known as Vrastamos. It is famous for its tsipouro, which is made from the berries of Mt. Hortiatis, so don’t miss the raki festival on August 15th. A traditional small hotel operates in the village, housed in a fine old town house, now restored.

Taxiarchis
The village was known as Lokovi during the years of the Turkish occupation, but it acquired its current name in 1928 from its patron saint, Michael the Archangel. Taxiarchis took part in the 1821 revolution with tragic consequences. The Turks burnt down the village capturing and killing all those who didn’t have time to hide. Taxiarchis was finally liberated on October 10, 1912. There are two entrances to the village, one to the west which serves as the main entry point, passing by the Sipotoura, or Tsipotoura spring; and one to the north, which passes through the Stravros area and by the football field.

Taxiarchis is built on two hillsides to the west and southeast and is situated between four natural springs: Sipotoura, the Upper and Lower Spring, and Iho (local water). The town square is known as the horos or horostasi, an old name meaning ‘dancing place’; the name refers to exactly what happens here every Sunday after the morning service at church. In the square one can find cafes as well as the statue of Giannis Parliaris, who was a commander of troops on the Macedonian front. A war memorial, the community store, the elementary school, and the local health center are all situated off the main square. In the lower village is the church of Michael the Archangel, which takes its name from the patron saint of the village. His feast day is celebrated every year on November 8th.

The women’s Ev yevesthai cooperative operates in Taxiarchis, offering a selection of local products such as jams, preserved fruits, frumenty, etc. The village is well known for its mushrooms as well as for a variety of ‘egg apples’, so called owing to their colour. Other local products include beans (particularly the pardala variety), Holomontas potatoes, as well as forestry products such as firewood and charcoal. During recent years fir tree cultivation has developed rapidly in order to meet the demand for Christmas trees. In the Holomontas area surrounding Taxiarchis, there are many forest trails for hiking, mountain biking, and four wheel drive vehicles. You will also find traditional guesthouses that cater for agricultural tourism, offering both a pleasant and comfortable stay, and open all year round.

Arnaia
During the Turkish occupation Arnaia was known as Liarigovi, and during ancient times as Arni, Arnaia and Avgaia. Its current name was created in 1928 from the first three letters of Arni paired with the last three letters of Avgaia. In 1821 it was one of a total of 42 villages that were burned to the ground by Baram Pasa. It was the most important of the 12 mademohoria of the area, where merchants and professional people gathered. The population of Arnaia and the rest of the 12 mademohoria villages fled to Mt. Athos, Ammouliani and off towards the Pangos mountain range.

Arnaia was liberated from the Turks on November 2, 1912. When the residents returned home after the disaster they immediately began rebuilding their devastated village.
The Ministry of Culture has declared Arnaia a historic site because it has important examples of traditional Macedonian architecture. The center of the village is the central square or pazari as it is called. It contains cafes, small tavernas, shops featuring local products and just a bit farther up, the folklore museum, which is housed in the historic mansion known as the Giatradiko.

Located by the horostasi is the old village school, which was once the historical seat of the Aristotelis municipality. The church of Agios Stephanos, built in 1812 but burned in the revolution of 1821, is right next door. The bell tower was built in 1889 and stands next to the old school. The church of Agios Stephanos is the largest in Halkidiki, in terms of both space and height. Starting at the horostasi, the road to the left leads towards the church of Agion Anargyron and the lower part of Arnaia; the road to the right leads toward Varvara, (another mademohori), Neohori, Stageira, Ouranoupoli and Mt. Athos. It’s worth a walk to the wooded knoll of Agia Paraskevi, which has a small church of the same name. The celebration that takes place there on July 26th is Arnaia’s largest festival, followed by an exciting feast.

For a panoramic view of Arnaia, walk up to the small chapel of the Prophet Elijah, about 2.5km. from the village. Arnaia’s local products include textiles, honey, mountovina or tsipouro mixed with honey, jams, preserved fruits and dairy produce.

Megali Panagia
A mountain village about 13 km from Arnaia, Megali Panagia used to be called Revenikia. It came by its current name when a small chapel was built close to the village in the 19th century in order to house a miracle-working icon that was found there. The chapel quickly attracted many religious pilgrims who, in turn, gave the village the name Megali Panagia. The old houses in the village are of particular interest.

Stageira
Stageira lies at an altitude of 500 m. between the forests of the Stratonikos mountain range and the Ierissos and Strimonikos gulfs. The city was founded in 655 BC by Ionian settlers from Andros, who were then joined by former inhabitants of Halkida. Aristotle, one of the greatest Greek philosophers and thinkers, was born in Stageira in 384 BC. His parents were the king of Macedon and his wife, Amintas Nikomachos II and Phaestida. He served as tutor to Alexander the Great for eight years, introducing him to the masterpieces of Greek philosophy and poetry, putting special emphasis on Homer. Aristotle died in Halkida in 322 BC, but the people of Stageira brought his body home and buried his bones in their city.

When visiting Stageira today be sure to visit the church of the Nativity of the Virgin, as well as the Grove of Aristotle. The church was built in 1814 with the assistance of the Hilandariou Monastery on Mt. Athos. The small chapel of Panagouda Spiliotissa, built into the rock face, is also of interest. There are cultural events that take place there every 8th of September.
In the Grove of Aristotle, apart from the statue of the philosopher, you will also see ten instruments demonstrating some of the natural phenomena referred to in the great thinker’s Physics. 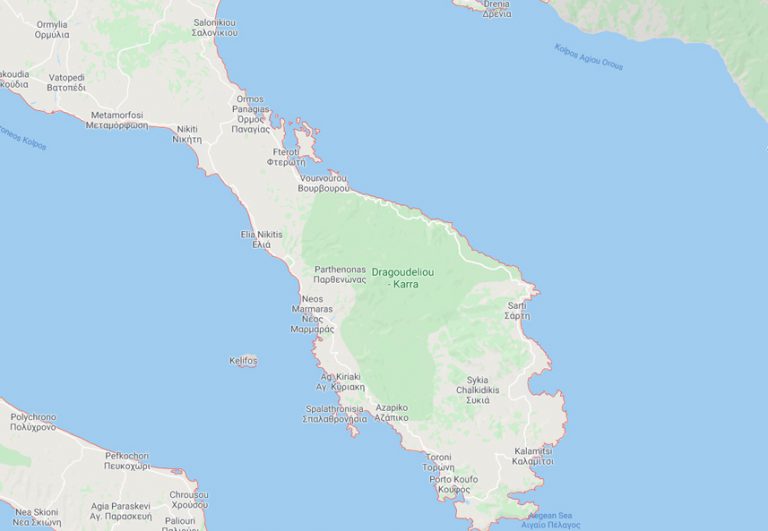 Agios Mamas Heading down towards the Sithonia peninsula, about four kilometers after the junction you will come to a sign to Agios Mamas. The town

Nea Moudania One of the more urban of the towns of western Halkidiki, with a population whose grandparents were refugees from Asia Minor in 1922.

The hotel is located at a distance of 105 km from Thessaloniki. The fully equipped rooms of Grecotel Pella…