In Western Halkidiki, at a mere 54 km southeast of Thessaloniki is the reknown Cave of Petralona. This cave was discovered in 1959 by the inhabitants of the area at the hill Katsika (642 m), near the village Petralona and soon became famous, not only because of the size or the wealth of its stalactites, stalagmites and its very intricate corridors and halls, but mainly because of the human and other fossils, which date from the Pleistocene Age that were found here and the secrets of human life and prehistory that it veils. It has a total surface of around 2.500 acres and its corridors are almost 1.500 m long. The “Main Hall” is 104 m long, 12 m wide and 8 m high. The stalactites and stalagmites make an impression with their wealth, shapes and colourings.

The old, natural entrance to the cave has been shut by the precipitation of rocks, many thousands of years ago. A new, artificially opened entrance leads to its interior. The cave has been researched and developed and now, illuminated, makes quiet and impression on the visitor. It is a impressive masterpiece, created by the water, which worked secretly for millions of years and with its pervasive power carved an underground stone garden out of the limestone mountain.

The cave of Petralona served as a home for the first humans about 700.000 years ago. In 1960, a fossilized human scalp, covered by stalagmite material, was discovered inside the cave. Scientists from the Aristotle University of Thessaloniki, where the scalp was sent, cleaned, studied and dated the fossil. It probably belonged to a 25-year old female (quiet old for that time) who live around 260.000 years ago. The chronology is not 100% certain. What is certain, though, is the it belonged to the species of the archanthrop (first humans) of the transition phase from the Homο erectus (standing man) to the Homο sapiens (wise man) and is the most ancient fossil of human found in Greece. Inside the cave, in successive layers, were also found fossilized animal bones (lion, hyena, bear, horse etc) as well as traces of fire. It is possible that it is the most ancient known fire on earth and the “civilization” of the archanthrop of Halkidiki is the most ancient known civilization in Europe. The visitor of the cave can also see the representation of the ancient inhabitants of the cave around the fire, at a specially arranged hall.

A palaeontological museum, at the entrance of the cave, hosts important exhibits.

Fossils of animals of the age of the archanthrop have also been found in Nea Triglia, Nikiti, Vrasta and other sites. 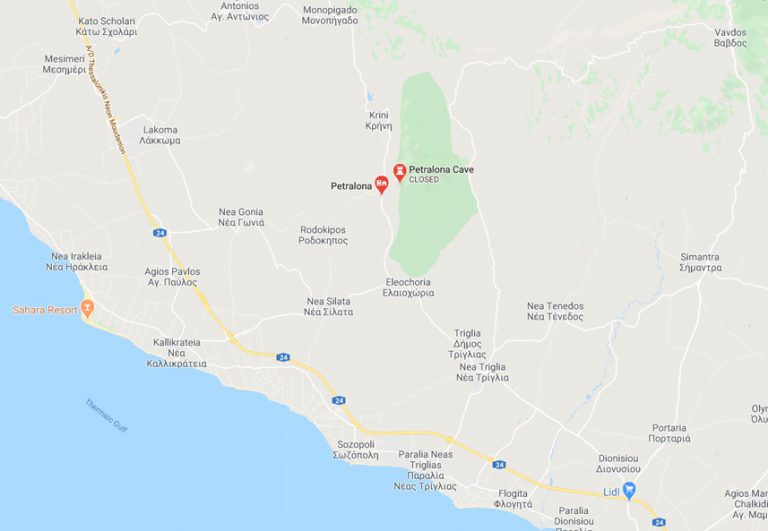 A visit to the Mt. Athos peninsula Halkidiki was introduced to Christianity in 50AD, when the Apostle Paul passed through Apollonia on his way from